Writer, journalist and activist Scarlett Curtis shares her philosophy on mental health, the direction of the mental health movement, and how she learned to live and thrive around her own diagnosis with post-traumatic stress disorder…

Scarlett Curtis is no stranger to speaking out about her mental health.

As a teenager, a standard spine operation for scoliosis dramatically changed the course of her life when she was left wheelchair-bound with chronic back pain, subsequently leading to her dropping out of school.

When she was 17, a second operation resulted in her being diagnosed with post-traumatic stress disorder, a mental health condition which triggered a wave of panic attacks, anxiety and depression.

Throughout her teenage years, Curtis chronicled the highs and lows of her mental health struggles on her blog and a variety of publications. In 2017, after working for grassroots feminist organisations in New York she started her own feminist activist collective, Pink Protest, which contributed to two bills to help end period poverty and secured the amendment of the Children’s Act to include protections against FGM.

In 2018, she curated Feminists Don’t Wear Pink (and other lies), a collection of essays by 52 remarkable women on what feminism means to them.

Now, following the publication of her second anthology, It’s Not Ok To Feel Blue (and other lies), Curtis reflects on the evolution of her mental health journey, her philosophy on the mental health movement, and why we should all change our perspective on what it means to thrive.

Adjusting to life after a diagnosis

“Growing up, I was very much what I consider to be a normal teenager. I had always been a little bit anxious, but I’d never really had too much to worry about.

Then, when I was sick from the ages of 14-17, I was in extreme isolation, pain and fear and I was very badly mistreated by a lot of different doctors in various ways.

And when I finally stopped being in pain, I had very bad PTSD.

I tried to go back to school but I had to drop out again, and I started having panic attacks every time I left the house. It’s been something that I’ve been struggling with pretty much every day since.

When I was first diagnosed, I thought I was the only person in my world who had ever had mental illness.

In my head, PTSD was something that was only really for soldiers, and I had no idea about the complexities of it. But I realised that was just because the very bad mental illnesses are the only ones that often we’re exposed to, and a lot of people are actually struggling on all kinds of levels.

At that time, I thought of mental illness as a bit of a life sentence. I thought of it as something that meant that you were hospitalised and could probably never live any kind of normal life again.

For me, the diagnosis really helped because I had thought I was a complete freak, and that there was just something fundamentally wrong with me. So, realising that I had this condition was unbelievably helpful.

I think a huge part of mental illness is that it only becomes visible when it’s very bad, and often until that point, no-one talks about it or shares it.

Once I started getting more into this topic, talking about my own mental health, and writing about my mental health online and in magazines, almost everyone in my life would come out of the woodwork and say, ‘I’ve had anxiety’, ‘I’ve had depression’ or ‘I’ve been through this’.

I just remember thinking, ‘why didn’t you tell me before?!’

When mental health takes over your life you often feel directionless, and being creative in moments of respite definitely gave me sense of purpose and a way to express myself.

The other thing that helped me was just having a to-do list that you can tick off can make you feel like ‘I can actually be a human and do things and not just be a depression robot.’

When I was at my worst, and everything used to feel really hard, I would literally write myself a list every day that said ‘get up’, ‘get out of bed’, ‘brush teeth’, ‘brush hair’, ‘have something to eat’, ‘get dressed’ – I would write out all of those actions and then tick them off like I’d just written an essay, and get a huge sense of achievement.”

My philosophy on mental health 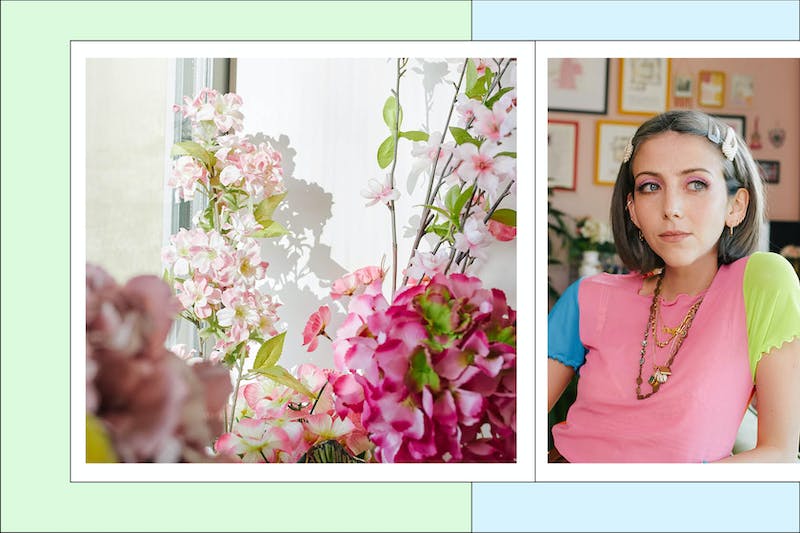 “Looking back, mental illness felt really black or white. I thought either I was going to be this sort of sub-human creature that was never going to be able to live a normal life, or I was going to get completely cured, and suddenly I’d find some magical pill that I could take and I would be the most confident, social happy person in the whole world.

Obviously as the years have gone on, I’ve realised that it’s neither, and there’s a very large grey cloud in the middle of both of those, which is where most people live anyway.

When I look back to when I was 17, the thing that was really killing me was how ashamed I was of my mental health. I remember I’d started reading people’s accounts of their mental health online, and every time I did it felt like this hand reaching out across the internet and holding my shoulder - the biggest comfort in the whole world.

I realised the only way I was ever going to get rid of that shame was by starting to write about it.

I took to my knitting blog and wrote about what I’d been going through, and got this outpouring of love and support not only from strangers but people close to me in my life.

I learned that sharing your issues will never solve the side of mental health that is chemical. It won’t fix your brain and it will never take it away, but I think we underestimate what a huge part shame plays in mental illness.

So my philosophy is that, ultimately, sharing the struggle will help us all.”

“A really important next step of the mental health conversation is talking about this intersectionality of mental health with other issues like gender, race, class and sexuality.

Mental illness can affect everyone, but it doesn’t necessarily affect everyone equally in terms of how they can get access to help, and I think that’s something we really need to be talking about.

We need to start raising the prominence of the really amazing activists who are already addressing those issues, and I think it needs to be acknowledged.

And there needs to be a shift in the way that we view things. If you’re a middle class white girl who’s suffering with mental illness (as I have been myself for many points in my life) and someone tells you what you’re going through is really hard, but it might be harder if you were black or if you were trans, you shouldn’t feel that takes away from our own experience.

People can get quite angry with things like that because they feel like in some way by talking about how it can be harder for different groups of people it takes away from their own suffering, but understanding those differences is just acknowledging the reality of the world we live in.

It’s a really important mental shift for everyone to make if this is ever going to get to the place that it needs to get in terms of intersectionality.

We also need institutions to become more empathetic. Although it’s getting easier to say to your friend, “I can’t come to dinner because I’m really suffering”, it’s a whole other thing when you’re saying that to your boss or your teacher or your university when you can’t show up for an exam.

If we were to figure out as institutions better ways of dealing with students and employees, it would be a really incredible next step.”

Caring for yourself and others

“I tend to think that taking care of yourself can be very specific for many different people, but something I have started doing which has really worked for me is having this logging app on my phone, where I keep track of which days are good days and bad days in terms of my mental health.

Being able to look at this evidence and realise that actually I have so many more good days than I do bad days has really helped me.

I think you can get in the mindset of thinking ‘I’m going backwards’ and actually there’s no forwards or backwards, you’re just living the life you’re living.

What I really loved most about working on It’s Not OK to Feel Blue (and other lies) is people saying to me ‘I don’t really suffer but I bought this book to try and better understand the people in my life who do’, because I think it’s incredibly helpful if you are trying to do that.

You should never try to fix people or be their doctor and tell them what to do, but just being there for them is so important.

Sometimes friends and family can feel very helpless when someone they love is suffering. They feel like they have to do something huge, like get them a doctor or force them to get out of bed, and actually sometimes all you need is just someone to sit with you and say ‘I’m really sorry you’re going through this and I’m here if you need anything’.

That can be enough.”

Changing my perspective on what it means to thrive

“For me, thriving with mental illness is about shifting what I think of when I hear the word ‘thrive’.

There are all these things that I still find really hard; I can’t really go out to huge parties, I find it very hard to travel, and I can find it hard to date sometimes.

But the thing that has really let me thrive is just accepting that I don’t need to do those things in order to be the person that I want to be.

I don’t need to be this kind of superwoman.

And that in itself has really helped me to double down on the things that I do love doing, which is writing and activism, being with the friends and family that I love, and not feeling like I have to push myself too much.”

“Live with optimism. Renew with hope.” philosophy’s renewed hope in a jar water cream is a lightweight, fast-absorbing water cream that replenishes parched skin by increasing skin’s hydration level by 86% and delivering a cooling burst of 72-hour hydration. Skin is left perfectly primed for makeup, with a fresh natural glow from within, helping you to have confidence for the day.

philosophy is the wellbeing beauty brand inspiring you to look, live and feel your best.

philosophy is the official partner of Stylist’s Remarkable Women Awards 2020.