The Making of Me

Want to know how to create a photo collection that looks as impressive as the experience felt at the time? We spoke to Claire Menary to gather her best tips…

These days, everybody is a photographer.

Whether it’s capturing a moment to add to your Instagram story, taking a shot of your brunch plate or photographing a sunset from your bedroom window, we all like to keep a record of our experiences and encounters.

But how do you go from amateur phone photographer to someone with an enviable collection of pictures that perfectly embody a moment in time?

We spoke to photographer Claire Menary to find out…

Composition is what makes the shot.

It’s all about framing. Often people don’t think about the little details that make a picture when they’re shooting.

They just see the entire subject and forget everything around it, but when you really think about the composition of the shot it becomes so much more appealing to the eye.

The right composition shows you’ve thought through the shots fully and that’s when it works and it fits.

The best tip for nailing your composition is to start by really looking at the background that your subject is going to be part of.

Leave the subject for now and consider the backdrop. Is it lit well? Is it too busy? Is it too distracting? Are there any wires? Basically, you’re looking for anything that’s out of place.

Once you’ve got the background sorted it’s time to bring your subject into it. Sometimes people think that going as wide as possible is the best because you get a full view of everything. In fact, while that can sometimes look nice, it’s best to focus on the detail.

Things like corner details or intricate features help capture the smaller moments. In my opinion that’s better than trying to capture the whole thing, which can look messy unless you are really considered with every single thing in your frame.

Next, go in. Don’t be afraid to get in close and play around with the angles and don’t think you have to shoot straight on – you can shoot from an angle.

There are so many angles in photography, so don’t just go with the obvious. Challenge yourself.

When you have beautiful, natural light it’s incredible and there’s nothing better because it also means you can work with shadow.

There’s a slight mood and a slight atmosphere that shadow creates in shots.

If you’re shooting people, it’s best that they face towards the light, unless it’s really harsh sunlight in which case the general advice is to seek some form of shade.

In instances where you have no other option than to shoot in bright light it’s usually best to change the settings on your camera manually to a really high f-stop.

It’s quite a technical term but it’s essentially the number that your camera shows you when you change the size of the lens. If you learn to shoot manually with tools like that, you’re onto something good.

When you’re shooting on a cloudy day it might be that your images come out really flat and dull and on the bluer side of the colour spectrum, but that’s also easily changeable in post-production.

On the other hand, if you’re shooting inside artificial light can help your camera create something better.

I would never encourage anyone to shoot in dark moody light if they don’t have some form of lighting to assist.

All of this is based on my own experience and being a self-taught photographer - I’ve picked things up from being experimental and learning as I go along.

Be savvy with your editing

The best way to get to grips with editing is to dive straight in and experiment.

Take an image and start moving a few dials to see what it does. For example, see what happens when you increase the exposure on a photograph or how the image changes when you down the highlights.

Don’t be afraid to play with it because that’s how you learn. It’s trial and error and no harm is done – that’s how you start to build a signature style in terms of your editing process.

If you’ve over-edited a photo, you’ll know about it.

It will either be too yellow, too saturated or too dull. You can see it straightaway because it becomes glaringly obvious.

The thing about editing with software like Lightroom is it enhances the image, whereas with an Instagram filter it masks the image and changes it to a point where it looks so far from the original.

I would always say if you’re editing on your phone use something like VSCO because it shows you how to manipulate what you’ve already got and how to boost it. 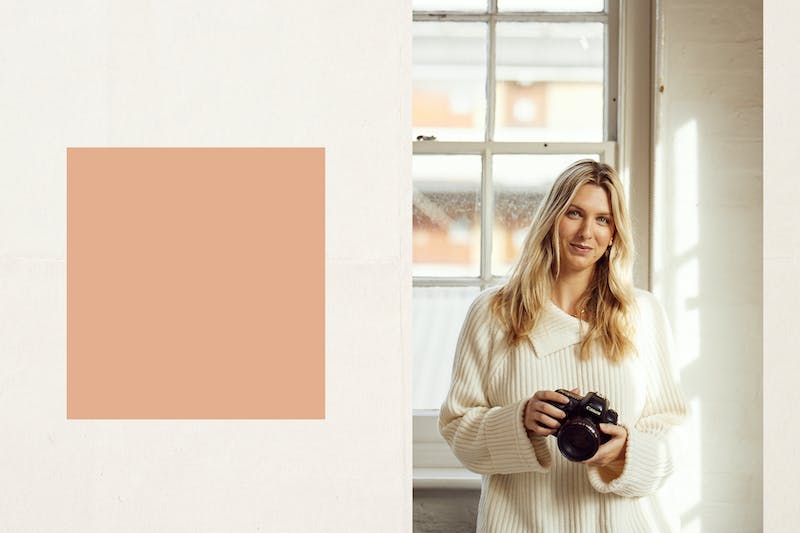 I adore travel photography and when I go away I’m very snap-happy.

I love it when you look at an image and there’s a story to be told and you don’t have to have been there.

One of my favourite images I’ve ever taken is a picture of two girls in Morocco.

It was my first visit to Marrakesh and I was just so in awe of how beautiful the city was and how excited I was to be there as it had been on my bucket list for so long.

One day, early morning, we went to the Ben Youssef Madrasa - a beautiful historic site that was once an Islamic college - when two girls over in the corner caught my eye as they were setting up their camera on a tripod to have a photo taken of the two of them.

I just loved the little moment that was between them, so I took a photo from behind of their silhouettes - I didn’t realise at the time but when I looked at the photo later, I noticed that they had matched their outfits.

It was so beautiful and such a nice surprise. It’s a photo that is imprinted in my memory and always takes me back to that first trip to Marrakesh which was just so inspiring.

I originally captured the photo because I liked the scene that I saw and I love that it’s only after I’d taken the photo, that I realised they were matching - it gave the photo an unexpected something extra.

On reflection, I love that detail the most. It’s not a perfectly framed photo and it’s the only shot I took of the girls, but I like it when photographs aren’t ‘perfect’.

The imperfect to me is perfect. That photo taught me that with photography, it’s not always about stopping to ‘set up’ the shot but rather, to capture the moment in its raw beauty instead.

Looking back at photographs is as evocative to me as smelling a perfume that brings you back to a past experience in your life.

For example, whenever I smell My Way I think of wearing it on holiday and my travels around the world in the same way that when I look back on my photographs I’m transported to that moment in time.

It’s all about telling a story of a certain moment in time. Photography reins you back in and allows you to relax into a moment.

Get to know your phone

When it comes to taking pictures on your phone, first of all make sure your camera is clean.

You wouldn’t believe how even tiny little fingerprints can cause a smudge or a mark on the screen that will come through on your photos.

It’s so simple but you wouldn’t believe how many people don’t do that.

Next, make sure your screen is turned up to the full brightness because then you can see fully what you’re looking at and take in the full frame.

Where possible always work with light as best you can.

If you’re trying to shoot an object in front of a window, perhaps shoot it to the side so you get the benefit of natural light instead of being backlit.

Most of us use our phones to snap pictures of food at restaurants and cafés.

I’ve seen people block out spotlights with menus to get a better shot which helps, but if you can get a table by the window or outside it’s perfect.

When it comes to shooting a plate of food I’m not a massive fan of flat lays – where you shoot the food directly from above.

I like coming in from an angle so you play with light rather than having to deal with the harsh light of flat lays.

My advice would be to go in from a 45 degree angle and just play around with it and you’ll get to figure out what you like.

The key thing to remember is that photography is all about capturing moments, so the main thing is to collect memories you’ll be able to look back on in years to come that transport you back to that time.

Embody the mantra ‘I am what I live’ with My Way, the new scent by Giorgio Armani. The contemporary floral fragrance is inspired by our search for meaning and authenticity and the experiences that shape who we are and how we connect with others.

My Way is created with a blend of consciously sourced ingredients from around the world, including vanilla sourced from Madagascar through an inclusive program that benefits local communities.